The use of the wind as a driving power has a long tradition. Windmills were used to grind grain, to crush oilseeds or to saw wood. Modern wind turbines use the power of the wind to produce electricity. They take advantage of the buoyancy produced by the wind when it flies past the rotor blades.

With an installed capacity of soem 34,000 megawatts, Germany is one of the world leaders in using wind power for electricity generation. In 2013, some 3,000 megawatts were newly installed nationwide. Apart from developing new sites, the repowering of existing projects hat great potential.

Besides, the development of Germany's offshore industry gains importance. As of February 2014, three offshore wind parks with a capacity of some 520 megawatts were in operation, two of them in the North Sea and one in the Baltic Sea.

According to a new report released today by IRENA, Germany is on track to realising its 2030 renewable energy targets. Read more » 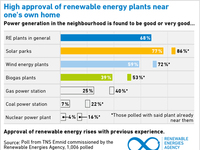 Portuguese secretary of state for energy Artur Trindade will today call on EU heads of state and government to set ambitious targets for 2030 including a 40% renewable energy target and a target for grid infrastructure. Read more »