In many areas of the renewable energy sector, German companies are world leaders. This is partly due to the unique research environment, both at universities and in companies. Research in the field of 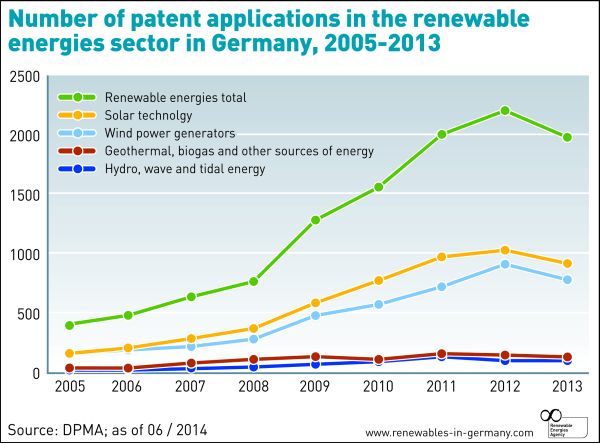 renewable energy is widely stimulated: The federal government, for instance, set aside 270 million Euros in 2012 within the framework of its focal are Renewable Energies. This exceeded 2011 expenditure levels by more than 40 percent. Funding aims especially at supporting innovative projects. The range encompasses the development of high efficiency photovoltaic cells, solar thermal power plants and measurement technology for offshore wind turbines. Such projects are often carried out as  private-public-partnerships.

Without the promotion of pilot projects and research, many new technologies would never see the light of day and the German industry would miss many opportunities in new markets. Many new inventions show that renewables are an innovation engine. The number of patent applications in the field of renewable energy has risen sharply over the last decade. In this sector, the German Patent and Trade Mark Office (DPMA ) has recorded some 2,000 patent applications annually. Regarding wind energy, many inventors concerned themselves with the integration of wind energy into the grid, with improving rotor blades, with offshore installations and the storage of wind energy. As for solar energy, many patent applications aimed at improving efficiency at lower production costs. The use of renewable energy sources is thus steadily becoming more and more efficient and effective.