During this special time of the global Corona pandemic with varying levels of lockdowns on local level, we are all facing similar challenges on how to manage our daily work, how to hold meetings and how to substitute cancelled business trips. Since two bilateral Energiewende Twinning Towns exchanges – one in Ireland, one in Poland - had to be postponed due to travel restrictions, the Renewable Energies Agency (AEE) and the HUMBOLDT-VIADRINA Governance Platform (HVGP) invited the five twinning town pairs to a webinar on May 15th 2020, in order to talk about climate communication and communication tools during the COVID-19 crisis.

Climate communication in times of Corona 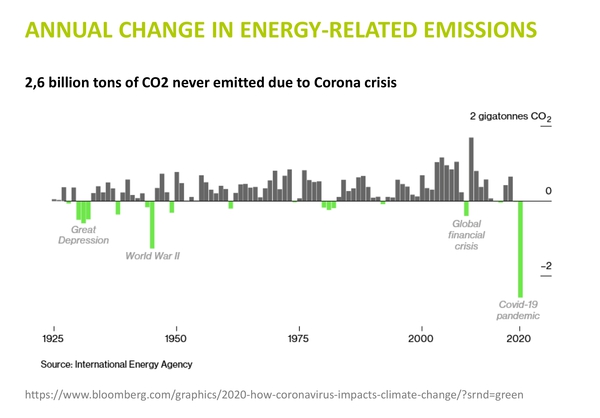 Katja Treichel (HVGP) gave insights into the international debate on the influence of the COVID-19 pandemic on the energy transition and climate change. All over the world, the positive environmental impacts of the pandemic have become visible: air and water qualities have improved tremendously. About 8% of the estimated total of CO2-emission for the year, will never be emitted into the atmosphere, according to estimates by the International Energy Agency – the biggest drop ever. Yet, one should be careful to communicate that the pandemic is the panacea to the international climate crisis. First of all, not all changes in figures can be attributed to Corona – The winter across Europe and North America was quite mild, so less heating was necessary while sunny and windy weather pushed for more renewable energy in the system. Secondly, most data are only estimation and we still do not know yet how the crisis will be further developing. Last but not least, the virus is not a cure for the climate: Shutting down economies and leaving millions of people in dire financial situations due to unemployment cannot present a sustainable solution, especially when there are still many countries that aspire similar living conditions as those in developed nations. However, we should use the crisis to make people aware of the interconnectedness of global challenges such as COVID-19 and climate. And we should also demonstrate how important it is to fight collectively against them.

Digitalized communication and formats for municipalities

But how to communicate and exchange thoughts on municipal energy transition when many fora and formats cannot be used? Christina Hülsken, AEE, introduced several online conference tools and explained their advantages and disadvantages. In general, there are still quite a few measures for municipalities to continue climate communication and promote the energy transition, e.g.: webinars instead of press talks, workshops and events, introduction or upgrading municipal newsletter, development and use of digital participation tools for citizens, expansion the social media work to other canals (Facebook, LinkedIn, Youtube etc.).

Christina Hülsken suggested to also consider the advantages of digital meetings: are time saving, increase flexibility, reduce costs for rooms and catering, offer various options of interactivity and feedback with the participants, and are more sustainable from a climate perspective as long travels are avoided. However, there can be challenges in digital communication such as different time zones in an international context or technical problems. Technical tests in advance and specification of rules such as muting microphones at the beginning of the webinar or meeting are recommended. One should be aware that facial expressions and gestures cannot be used in digital communication as much as in personal communication. Nonetheless speakers should use the camera option and use interactive tools to keep participants focused.

The Energiewende Twinning Towns Woerden from the Netherlands, Marburg-Biedenkopf, Steinhagen and Pfaffenhofen form Germany, Kozani from Greece, Dunleer and Galway from Ireland exchanged their experience about the general atmosphere and political situation in their countries and how they deal with climate and energy issues in the municipalities. In a survey during the webinar, six out of the eight municipalities stated they were able to work as much on climate and energy topics compared to before the corona-lockdown, the other two are still able to address those topics, but not as much as before.

Galway emphasized the great instrument of the energy monitor of their partner-municipality, Pfaffenhofen. The energy monitor provides real-time data on the share of renewable energy generation in the municipality of Pfaffenhofen. Galway is currently analysing which renewable energy solutions have a great potential in the area. Main interests are battery storages and hydrogen. Pfaffenhofen mentioned that since the start of the crisis, there has been a boom in the private building sector concerning investments in PV on rooftops. On the contrary, Irish municipalities reported that it is hard to convince home owners to change from fossil to renewable heating due to decreasing oil prices.

Energy twinning town Marburg-Biedenkopf focuses on climate and energy education. The municipality plans to share its knowledge with its twinning town Koscierzyna on how to build solar boats and cars with school children and organize races and events with them. Marburg is also active in producing video spots and tutorials to show that everyone can do something against climate change.

Kozani faces disadvantages in these times: the construction of renewable projects (solar parks) are delaying due to a lack of workers while the use of private vehicles is increasing because public transportation is limited. However, an environmental law was passed that should speed up procedures to build renewables in Greece.

Woerden experiences positive and negative impacts at the moment: While some decisions are being delayed as some staff members of the energy team are helping out at the health sector, online discussions with citizens on a wind park worked out very well. Their twinning town partner Steinhagen started a competition named “The blue house number” where homeowners can receive an award for energy efficient buildings. Also in Steinhagen, the online participation campaign “There is a tree missing” is designed to motivate citizens to name public places where they would like to have a tree planted.

Dunleer has adapted quickly to the situation, sees new opportunities in online education and established webinars and trainings online. The energy team notices that some citizens are willing to be more engaged in issues related to climate and energy transition. The strength of the community has come to forth when family members got involved to help elder citizens who might have difficulties with digital communication.

The discussion was very fruitful and while everybody wishes to get back to normal and meet again in person, the webinar was a swift and climate friendly opportunity to continue the valuable exchange between European energy transition municipalities across national borders.