European cooperation in Alheim and Dunleer: energy efficiency and renewables in building refurbishments

Alheim has long been part of the local energy transition. In 2012, the town in Hessen in central Germany won the Renewable Energy Agency’s Energy Municipality of the Month award. Since then Alheim is still strongly involved in the Energiewende – in 2016 it has been voted for the most sustainable municipality in Germany. Alheim advanced many projects in its electricity and heating sectors through renewable decentralized power plants.

Now, it is going one step further to share its experience with other energy system transformation actors. In 2019, it therefore joined Energiewende Twinning Towns. In this project, Alheim’s twin in Ireland is Dunleer, a town 60 km north of Dublin. The two municipalities have found common ground in their initiatives for participation and educational work in the energy system transformation. While Dunleer is a pioneer in the field of building renovation for private individuals, Alheim has mainly renovated and modernised numerous municipal properties. 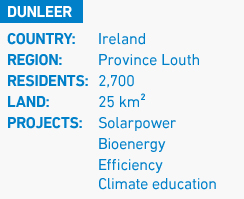 In founding the Dunleer Sustainable Energy Community, citizens, scientists, politicians and businesspeople joined forces to enable energy system transformation. The main vision is to meet the European climate protection targets by 2030. In the last four years, they have already achieved a great deal: Educated 500 people from across Ireland on steps they can take in their homes to reduce energy and use more renewable energy solutions. This education programme is called the Energy Ambassador project with participatory information events where the audience is inspired, educated and supported in taking steps for greater energy efficiency in their homes and places of work. Dunleer sees education, acceptance and participation around energy efficiency and renewable technology as an important building block for the future of the energy transition. Another action by the group has been the retrofitting of 200 buildings with measures of insulation, temperature controls and new renewable heating solutions such as air source heat pump, biomass boilers or solar panels. The energy efficiency of the buildings has improved, people are more comfortable in their homes and also this has resulted in considerable cost savings. The modernisation project is financially supported by the Sustainable Energy Authority of Ireland Energy suppliers and homeowners. Generation is a key part of the objectives of the Dunleer community and understanding how Alheim has achieved its generation will be a key learning Dunleer will achieve from this twinning.

Alheim had already renovated and modernised municipal buildings as part of intermunicipal cooperation between the three German municipalities of Bebra, Rotenburg and Alheim. That project focuses on intermunicipal cooperation for urban development without growth and promotes building refurbishment. Similar to the Energy Ambassadors in Dunleer, climate protection education in Alheim was considered right from the start. At the environmental education centre in Licherode, citizens are trained to pass on their knowledge about the energy transition to others. In addition, climate protection and renewables are anchored in school curricula and even in kindergartens.

"The renovation of municipal buildings was just the beginning in Alheim – now it's all about private households and increased energy efficiency for citizens.” - Petra Herzig, municipality of Alheim

“By explaining the advantages of energy efficiency and renewables, we have succeeded in getting the citizens of Dunleer to turn their attention to the topic of building renovation and modernisation.” – Eugene Conlon, Energy Team Dunleer 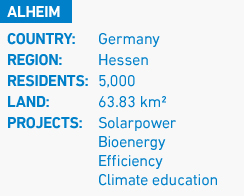 Renewables have also been integrated in the community’s landscape for a long time because Alheim invested in solar power plants at an early stage. Solar- and bioenergy within the municipality ensure that Alheim can cover almost 100 percent net of its electricity consumption with renewable energy. At the same time, regional added value has grown because local solar power companies have created jobs and investments were made in renewables. 58 million Euro have been invested with a local value added in earnings of 6 percent. Alheim managed to allow citizens to participate in the growth of renewables, including the local heating network, which is to be fed by solar thermal and bioenergy. The participation of citizens is achieved by listening, informing and by giving the opportunity to get involved and create the projects together. There will be information events and close cooperation with other municipalities that have already successfully implemented citizen participation in local heating networks.

In the Energiewende Twinning Towns project, Dunleer and Alheim see this as an opportunity to share their experience in building refurbishment, generation, discuss climate protection, education concepts, and advance the energy transition. The first joint workshop took place in October 2019.

Alheim welcomed the Irish partners on 22nd and 23rd of October as part of the Alheim Climate Week. 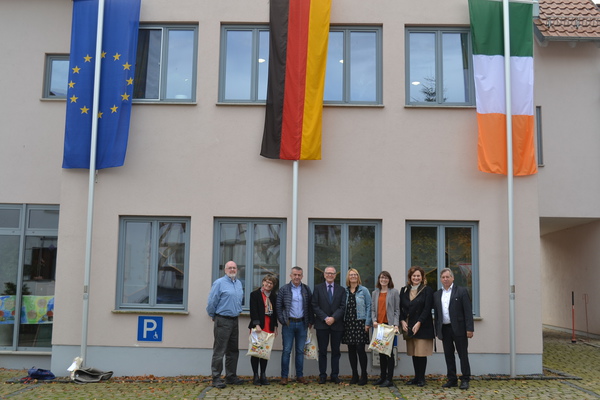 On the first day of the exchange, Mayor Georg Lüdtke, together with Petra Herzig, who is responsible for village renewal and climate, received the Irish group in the community centre. Afterwards the group visited the environmental education centre Licherode, which is one of the first of its kind. Up to 3000 children per year learn about ecology and local sustainability. The concept is based on extensive manual work and direct contact with nature, so that environmental cycles and the necessity of valuing limited raw materials can be illustrated. In the afternoon, a visit to sustainable companies was scheduled as part of the Alheim Climate Week. The first stop on the energy tour was at Kirchner Solar Group GmbH, which is active as a service provider: this includes the planning and sale of photovoltaic systems as well as the evaluation of areas. During his visit to the Häde sample poultry farm, the farmer of the year 2019, Fabian Häde, presented his farm in the category of poultry farmer, which has been selling organic eggs since 1975. Fabian Häde is also co-operating with a nearby biogas plant. The waste heat is used to heat the barn for chick rearing. The biogas plant BPA Biopower Alheim is owned by nine farms. The exchange between citizens, other local actors and the Irish partner community continued in the evening in the "House of Generations" in Heinebach. Among other things, the climate protection concept of the municipality of Alheim was discussed. On the second day of the exchange, the group of representatives from Alheim and Dunleer visited the exhibition opening of the Energy Saving Campaign Hessen in the VR-Bankverein Heinebach, followed by a visit to the energetically renovated and modernised village community centre in Sterkelshausen. In the concluding workshop Dunleer was particularly impressed by the experienced intensive inter-generational cooperation on site. Alheim and Dunleer face similar challenges and both municipalities are convinced that the cooperation with neighbouring municipalities is more successful. Dunleer also wants to transfer this Alheim approach to its own region.